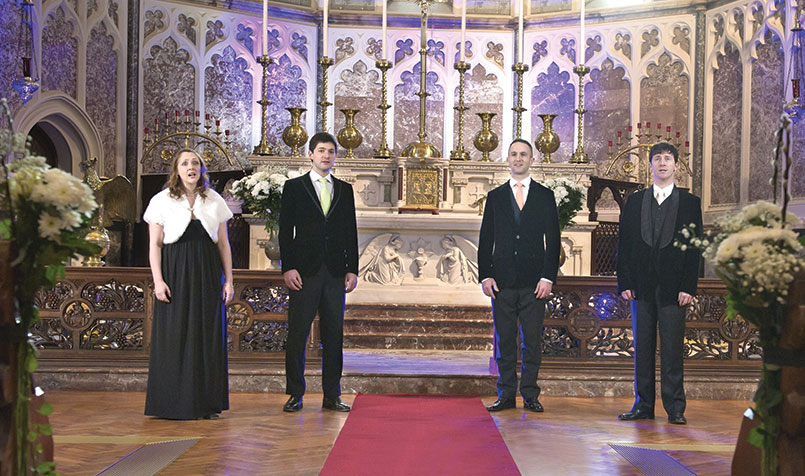 On the first and third Sunday of each month Crux sings at St. Mary’s Church on Haddington Road the 9:30am mass. With time and with further donations from the public we hope to sing every Sunday morning.
Occasionally, we also sing for the Tridentine mass at St. Kevin’s Church on Harrington Street. For our up-to-date calendar, see our Facebook Events page.

Numbering four or five voices – sometimes up to ten on major feast days – Crux sings the Ordinary of the Mass and – where reasonably possible – the Propers.

Here is a beginner’s guide to why we sing these texts with an explanation of Latin terms and the overall diary structure that informs us what to sing on any given day:
The Ordinary (‘order’) is the set menu: it refers to those parts of the mass that remain unchanging throughout the year: ie the Kyrie (Lord have Mercy), Gloria, Credo, Sanctus (Holy, holy…) and Agnus Dei (Lamb of God…) – we sing all of these except the Credo. It is spoken as the sung version tends to be very long.
The Propers, by contrast, are the daily specials, the various sacred texts specific to each calendar day such as the readings, psalm, Gospel, for example. Woven around the framework of the Ordinary, the Propers make a complex tapestry of liturgical writings, a vast literary cycle narrating the Old and New Testament. Its complexity was designed to mirror that of God. Each text will only be heard once in a year (if even that often).
Because of the sacred significance of these hallowed scripts, they were traditionally spoken by the priest in an elevated, mannered way to distinguish them from everyday dialogue (perhaps a bit like the Muslim call to prayer). This dramatic style became more musical over the centuries until it certainly became singing – at least in the hands of a talented priest. An oral tradition developed for centuries before the arrival of paper technology permitted this singing to be written down. This notation process began in the 10th century with rudimentary symbols, dots and ticks over certain important words and became more detailed and uniform with the years, culminating in the great academic compiling of hundreds of chants (and chant styles) by the monastery of Solesmes in the 19th century – the most widely used chant book today.
In the examples below we see the development of Western chant notation from the 11th century to modern day:


Over time, this music evolved in Europe to become a complex system of harmony and polyphony writing, culminating in an abundance of music composition in the Renaissance period (much of it Church-funded). Today, this is the music most commonly sung by Crux, usually sung in four or five-part polyphony. Combined with this, we also sing plainchant as it grants us insight into later polyphonic music. We observe the complex rules of harmony that characterise the sound of Western music and we admire the lengths to which Renaissance composers went to conceal the mathematical constructs of their art.
Latin is the language of the established Church. We sing in Latin in between mass readings in English. If you’ve ever wondered what the choir is singing about, the answer is we’re probably singing the same text you just heard from the lectern, just in a different language. The role of the choir is to embellish and celebrate the sacred texts and grant the congregation greater opportunity to consider their meaning.


We are grateful to the clergy and board of St Mary’s Church for hosting and supporting Crux. We also acknowledge the generous support of local patrons who are crucial to our group’s continued existence at St. Mary’s.