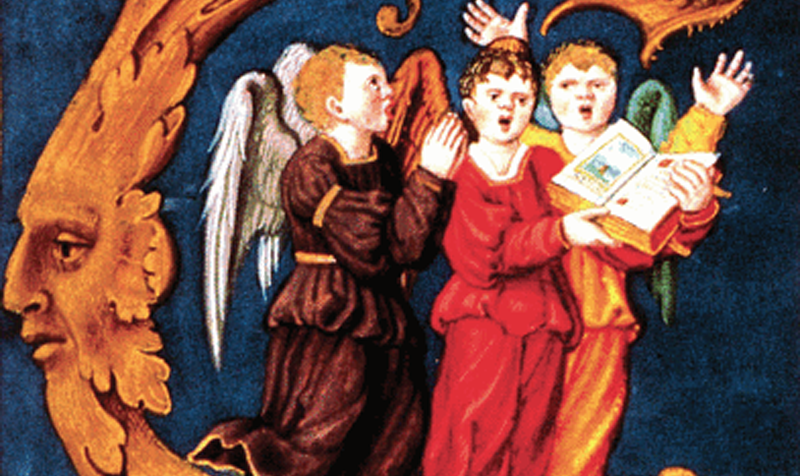 The choirs of St. Mary’s Church present a Christmas concert of sacred and secular music, proceeds from which will go to the church Music Fund. The first half of the concert will feature Classicus Youth Chamber Choir, who – under director Máire Ledwith – will perform Felix Mendelssohn’s much celebrated Hear my Prayer (which includes the famous Oh for the Wings of a Dove). Classicus will later sing a collection of lighter Christmas music and will be accompanied by Siobhán Kilkelly on piano. Also in the first half the audience will enjoy the solo talents of Ciarán O’Connell, flautist. A short interval will follow, just long enough to enjoy a glass of mulled wine, mince pies and a raffle prize-giving.
The second half of our concert presents Benjamin’s Britten’s A Ceremony of Carols (SATB with Anne-Marie O’Farrell, harp), details of which are as follows:

Gerald Bullett (1893–1958) was a British novelist, short story writer, critic and poet who, we’re told, disliked ”prudery, Prohibition, blood sports, central heating, and literary tea parties”. However, he enjoyed poetry and in 1939 published a collection of Medieval works under the title An English Galaxy of Shorter Poems.  Just three years later the twenty-nine-year-old Benjamin Britten(1913–1976) picked up Bullett’s book on a stopover at Halifax as he and his partner Peter Pears made their month-long homeward journey from America to Britain. The chosen texts proved to be a source of great inspiration for the cabin-bound composer, resulting in a set of seven pieces that he titled A Ceremony of Carols.
These were promptly confiscated upon his arrival in England  (as had other music of Britten’s during his voyage; war-time authorities suspected the language of music as a possible hiding place for code.) When finally returned, Britten added the movement Spring Carol before the first performance of the piece in December 1942. In preparation for its publication in the following year, the composer added the processional chants that begin and end the set, also Wolcum Yole!, That Yongë Child and the enchanting harp interlude.
Originally written for upper voices and harp, the piece was later arranged – at the publisher’s behest and with the composer’s consent – for mixed voices by Julius Harrison, the English conductor and composer.

The poetry collection was written in Middle English with many works labelled Anonymous. Of the authors that are identified in Bullett’s collection, their biographies reflect the fierce struggle for religious domination in late-Medieval Britain.
Balulalow was the work of some or all of the Scottish Wedderburn brothers – James, John and Robert – who together were known for targeting Roman Catholicism through the publishing of sacred parodies based on popular ballads. At different stages all three had to flee their home of Dundee for the continent to avoid arrest or persecution, spending time in France and centres of religious reform such as Wittenberg in Germany. Balulalow is a lullaby sung by Mary to the Christ child, a translation of Martin Luther’s Christmas Eve carol Vom Himmel hoch da komm ich her, first published in 1535 in Geistliche Lieder.
This Little Babe and In Freezing Winter’s Night. Englishman and Roman Catholic Robert Southwell was ordained in France in 1584 as it was then a capital crime under the rule of Elizabeth I for native Englishmen to enter the Roman Catholic priesthood and remain on English soil for more than forty days. Unwisely, Southwell returned to his home country two years later as an underground Catholic missionary. After six years of such work, he was arrested and tortured, and spent three years as a prisoner in the Tower of London. In 1595, at the age of around 35, Robert Southwell was tried and convicted on charges of treason, and was hanged, drawn, and quartered. His writings, which were very popular for several decades after his death, are said to have influenced, among others, Shakespeare and Donne. In 1970, he was canonised by Pope Paul VI.
Spring Carol. The poet responsible for this joyous outpouring is unknown but we have evidence that this poem was also set to music by William Cornysh in 1530, the composer associated with one of Britain’s most monumental books of music composition; the Eton Choirbook. The text has little to do with winter or the Christmas story but celebrates the joy of nature and worship of God the creator. Its inclusion serves to remind us that the movements of A Ceremony of Carols were not originally conceived as a whole but written as individual pieces, later gathered together with a popular success that continues to this day.
— Paul  McGough